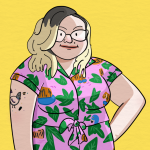 Elyce Phillips is an illustrator, writer and comedian. Her work has appeared in McSweeney’s and Junkee, and she has performed at the Melbourne International Comedy Festival, Melbourne Fringe Festival, Darwin Fringe Festival, Fringe at the Edge of the World and she appears regularly at The Improv Conspiracy in Melbourne. Her work can be found in Heaps Comics and on Twitter.