As a cartoonist, I run the risk of ‘offending’ someone, somewhere, every day. [But] I firmly believe that the most effective means of combatting the enemies of freedom of speech is by exercising our freedom to speak. 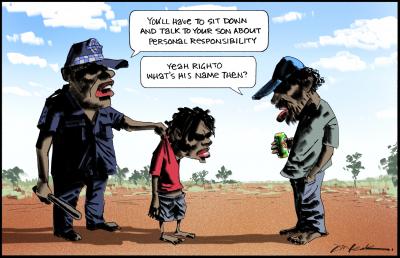 Bill Leak drew this cartoon as part of the debate around the issue of juvenile detention in the Northern Territory. ‘My intention was to draw attention to … the high level of parental neglect and abuse of children in many Aboriginal communities [that] is one of the underlying reasons that … 97 per cent of inmates in the detention centre were Indigenous.

The cartoon generated an at times bitter controversy. Some people challenged the content of the cartoon through, for example, #IndigenousDads. Gerry Moore, chief executive of the Secretariat of National Aboriginal and Islander Child Care, felt saddened by what he saw as stereotypes used in it. However, he acknowledged that it had also opened up an ‘important discussion … [about] how we approach racism and the portrayal of Aboriginal and Torres Strait Islander people in our national media.’ Bill Leak welcomed this discussion.

Much of the controversy centred on whether the cartoon should have been drawn and published. Some argued that it was ‘offensive’ and therefore should not have been published. Three complaints were made to the Australian Human Rights Commission under Section 18C of the Racial Discrimination Act. All were later withdrawn by the complainants. Some called for Leak’s dismissal from The Australian.

Leak and those who supported his position argued that freedom of speech should allow the community as a whole to have access to the widest possible range of views and to openly debate them, winnowing out bad ideas in the process. As Peter Greste, the Australian journalist imprisoned for 400 days in Egypt because of his reporting for Al Jazeera, says, ‘If we chip away at the freedom of speech, we risk damaging a vital part of our democracy. And as someone who went to prison for my reporting, I know what that can look like.’

Freedom of speech is a central issue in our democracy. Some, like Bill Leak, feel it should be unfettered. Others believe that causing offence is unacceptable. And others still, like Peter Greste, feel that there should only be some limits on, for example, inciting violence. Ultimately we, the community, have to decide. Cartoonists draw lines for us every day.

Where will we draw the lines for cartoonists?